Yasser Saeedian has just commenced a PhD in the School of Psychology with the Newcastle-Oxford Research Centre for Conflict and Cohesion (NORCCC) that will explore people’s daily experiences of intergroup contact and intergroup anxiety using experience sampling methods and psychophysiological measures. Yasser’s interest in working with world-class researchers in a multicultural context has taken him from Iran to Australia.

“Living in a culturally diverse environment and undertaking my PhD with NORCCC, supervised by Associate Professor Stefania Paolini and Dr Elise Kalokerinos, have provided me with a tremendous opportunity not only to increase long term research capabilities, but also to develop a global identity by interacting with people from different ethnic backgrounds that I have never had contact before” Yasser said. 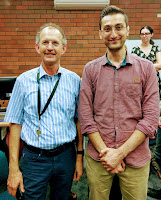 The first two weeks of his PhD coincided with Professor Miles Hewstone’s visit to UoN. Prof Hewstone is one of the most influential and productive Social Psychologists in the world, currently at the University of Oxford and Global Innovation Chair in NORCCC at UoN.

“All I was thinking during these two weeks was how I could make the most of Professor Hewstone’s visit. His valuable suggestions for my PhD were so inspiring. Through the informal meetings, he provided us with his practical tips on how to stay academically motivated and maintain a work-life balance. It was also very exciting to listen to his experience about his involvement in public policy input relating to improving intergroup relations in the UK. I think they were two extraordinary weeks” he said, smiling. 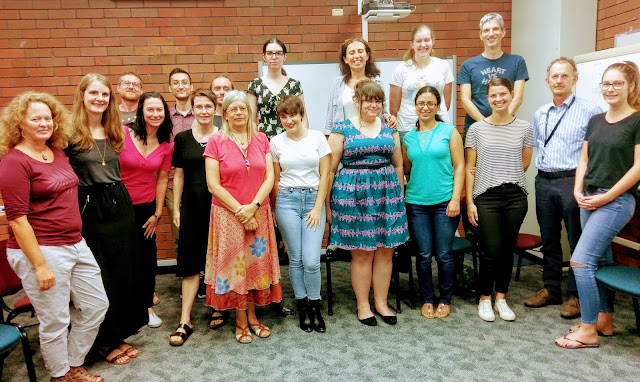 For more information on the Newcastle-Oxford Research centre for Conflict and Cohesion:  https://www.norccc.org/

Today I write to you from sunny Wollongong, where I am attending the April HODSPA (Heads of Departments and Schools of Psychology Association) meeting where all the heads of psychology from around Australia meet to discuss critical issues for the discipline and profession of psychology.

It has been great to catch up with colleagues from around Australia and to share our combined concerns and interests for our schools and departments. Some of the important areas of discussion has been around the new APAC requirements. For those of you who are not familiar with the process, we teach psychology to a very strict standard with rigid compliance requirements, and our compliance with these standards gets assessed every 5 years. For the first time in a long time, the compliance requirements will change to allow us to be more flexible and creative. This change will come into place next year and affect us in our next accreditation round.

On the back of the new accreditation requirements, there was also much discussion around the indigenisation of the undergraduate and postgraduate curriculum. Mem Mahmut gave a talk about his work around collecting ideas of ‘best practice’ from around the world to advise us on how to do this in an effective, authentic and sensitive way. Mem has been a visitor to our school in the past, and I caught up with him over lunch and reinforced our support and commitment to his work. I am looking forward to having him visit again later this year.

The afternoon discussions revolved around how we can provide opportunities to make psychology students more work-ready. What are the skills that psychology students need after 3 and 4 years of study to enter the workforce, given that many students don’t go on to clinical professions? What are the work-ready skills that our PD students need given that less than 1% of STEM PhD graduates go on to full-time academic careers? How can we make our students more future-proof, confident and employable as they move into the workforce? This is an exciting time to study Psychology as the discipline and profession changes and reinvents itself to be more adaptable, creative and responsive to the needs of the individual and society. These are discussions that we will continue in our school and I value your input and feedback. 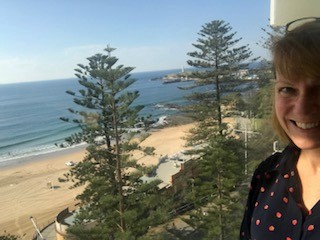 University of Newcastle PhD students present at the Annual Conference of the Society of Australasian Social Psychologists – Wellington, New Zealand


Social psychology PhD students Olivia Evans, Monica Gendi, Stephanie Hardacre, Romany McGuffog, and Matylda Mackiewicz, (along with Associate Professors Mark Rubin and Stefania Paolini, and Dr Elise Kalokerinos) recently attended the Annual Society of Australasian Social Psychologists (SASP) conference in Wellington, New Zealand. Being the most popular avenue for the dissemination of current social psychological research within Australasia, the 3-day conference attracted 150 pre-eminent national and international researchers. It allowed us to communicate our research to a larger academic audience, and to build collaborative networks with key Australian (and international) academics. 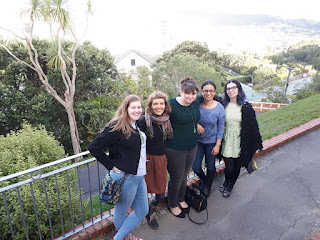 Olivia was shortlisted for the Outstanding Postgraduate Research Award, and presented on the role of social integration in the relationship between social class and mental health. Olivia also chaired her first symposium, titled “Socioeconomic Inequality”, where she discussed the role of social trust and support in the relationship between social class and mental health. Romany participated in the same symposium, presenting findings on the relationships between social class, sleep, and mental and physical health. In different sessions, Monica presented on how perspective taking and social support mediate the relation between need for closure and mental health, while Stephanie delivered a presentation on the effects of leader gender and message framing on mobilising people for gender equality. Matylda presented qualitative analysis findings regarding intergroup contact in the context of attending a Hijab stall.

Meanwhile, Mark presented on workplace sexism and belonging in male-dominated industries, while Stefi discussed findings relating to the effects of incidental and integral emotions on interethnic bias. Finally, Elise delivered a talk on the effects of negative emotional anticipation in regards to negative events.

Because half of SASP’s attendees comprise postgraduate students, it offered a different atmosphere compared to typical conferences, in that it allowed us to network with students and academics alike. We were treated to a very special traditional Māori pōwhiri (welcome ceremony), followed by a hongi (ceremonial touching of noses). We also enjoyed postgraduate workshops discussing the benefits (and perils) of working with the media, and demystifying the publication process. On the social side of things, a visit to the fascinating Te Papa Museum was followed by a trip on the Wellington Cable Car. In what is quickly becoming a SASP tradition, we then tried our hand at Wellington’s only Escape Room – with great success! We can’t wait to attend next year’s conference – this time a little closer to home in Sydney. 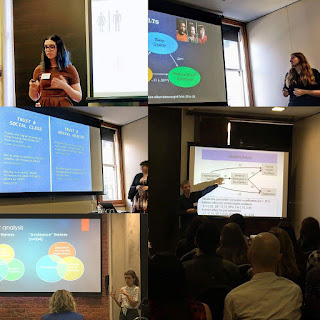 Welcome Prof Kristen Pammer, the new Head of the School of Psychology at the University of Newcastle

I am delighted to be here at the School of Psychology and Newcastle University. I have been here now for almost 3 months and have started to get my head around names, faces and acronyms. I’m still not yet used to the mosquitos, but I guess that will come with time and liberal amounts of Aerogard.

My undergraduate and postgraduate years were spent at a university much like this one – the University of Wollongong. From there I took up a position at the Australian National University and was there for almost 20 years. During this time I did spend postgraduate years in England, Finland and Japan. These international positions developed my skills in neuroimaging in that I was privileged to work in some of the best MEG (magnetoencephalography) laboratories in the world. Unfortunately now-days I don’t get the chance to do much MEG work, but I have been working lately in the area of road safety, which satisfies my desire to be a part of research that is directly applicable to people’s lives. This complements the research that I have done all my career on understanding dyslexia and reading disorders.

Last night I found the university’s motto; “I look ahead” which I found to be particularly prophetic as it captures very much my vision for the school. My aim is to enable all staff and students to be the best that they can be. To “look ahead” and focus on being great, to “look ahead” to shape the future in educating others and contributing to research that shapes lives.

By working together we can look ahead to ensure that our school takes its rightful place in some of the best psychology schools in the world. I look forward to walking that path with every single one of you over the next years, and I encourage you to tell me about is best about our school and what we can be doing better. I am committed to an open door policy where everyone is welcome to drop past for a chat, so I look forward to meeting you all. 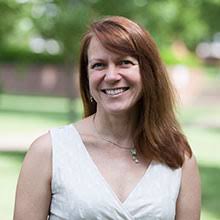 Researchers and HDR students from the School of Psychology at the University of Newcastle shared their latest scientific discoveries with fellow experimental psychologists at the Annual Meeting of the Australian Society of Experimental Psychology (EPC 2018).

The meeting took place in Hobart April 4-7, 2018, and was a great success. Among the excellent oral and poster presentation there was a hefty representation for our school's Higher Degree students, who had all done a terrific job and were highly commended for the quality of their research and presentations. These include Zach Howard (multitasking),  Laura Wall (modeling multiple subjects across multiple tasks), Asheek Shimul (mobile phones and math), Reilly Innes (cognitive workload), Alex Thorpe (workload capacity), Caroline Kuhne (priors for model selection), and Paul Garrett (life logging). 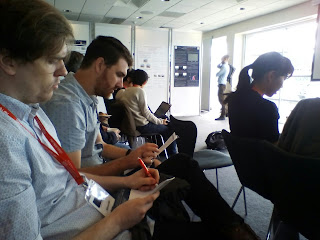 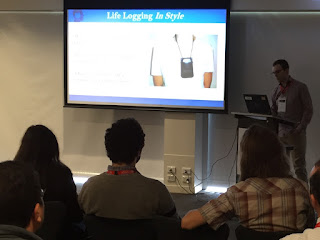 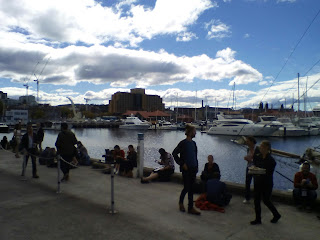