Fatima Azam (left) and Stefania Paolini (right) have won the 2015 APS Psychologist for Peace Research Award and have been shortlisted for the 2015 Muslim-nonMuslim Understanding Award for their hijab stall initiative. The recognition of the merit of their action research in areas of social inclusion timely marks a new focus of the school on Equity and Diversity. 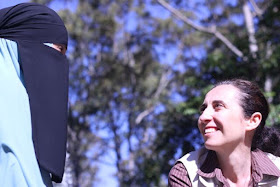 Australia is currently afflicted by a social climate of hype and negative media around Muslim and non-Muslim relationships (e.g., protests by ‘Reclaim Australia’). Fatima and Stefania’s intercommunity initiative was aimed at instigating positive change in the community and within the university, as well as create a platform for open and respectful dialogue between Muslim and non-Muslim Australians towards a more harmonious and genuinely integrated multicultural Australia.

The hijab stall project is an intercommunity engagement and research initiative undertaken at the University of Newcastle, between March and September 2015. Non-Muslim women from students, staff, and the general community were invited to attend a hijab stall where they could learn from Muslim women why they wear different headcoverings. They were also invited to try one on. Fatima with 14 other female Muslim volunteers from a variety of national backgrounds and wearing different Islamic headcoverings , ran seven hijab stalls across three UON campuses and Newcastle CBD precinct over a period of six months. These hijab stalls contributed to important diversity and equity initiatives, like 2015 Harmony Day, and Cultural Awakening Day. They involved also many non-Muslim volunteers thus modelling genuine intercommunity dialogue and partnership.

The hijab stall project also offered the basis for Fatima’s honours research and a new and larger research project sponsored by an Australian Research Council’s Discovery Project awarded to Dr Paolini which aims at identifying new ways to break down barriers between Muslim and non-Muslim Australians, and more broadly increase social harmony and integration in Australia’s diverse society. Fatima has been invited to receive the award and present her research at the 2016 APS congress in Melbourne, next September.

The announcement of this award marks the beginning of a new focus on Equity and Diversity issues by UON School of Psychology. A new Equity and Diversity working party, chaired by Stefania and including 25+ members of staff and postgraduate students in the school, was established this week. It will drive the Indigenization of psychology curricula and aspires to take the school and its broader areas of influence towards more inclusive psychology teaching, research, and professional practice. 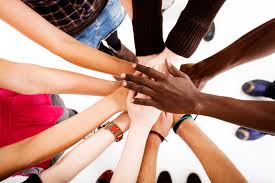